Home Articles Does peanut butter cause acne: science weighs in on the debate

Get Paid To
Do Simple Jobs
On Social Media

If you have spent more than 5 minutes googling “does peanut butter cause acne”, you might be convinced that it was invented by an ingenious marketing team as a strategy to increase pharmaceutical companies’ profits from anti-acne treatments.

This might sound like an exaggeration, but it is not that far off from the common (mis)conception about the relationship between peanut butter consumption and its effects on acne.

But do you really have to give up your precious peanut butter to get clear acne-free skin? Science says “probably not”.

Does peanut butter cause acne?

Peanut butter will not cause or aggravate your acne, unless you have a peanut allergy. Since peanut butters often contain inflammatory ingredients such as added sugar and trans fats – which are acne-aggravating, you can opt for brands that do not add these.

Let’s talk a bit about why limiting sugar and cutting out trans-fats entirely is important if you have acne.

Often peanut butters contain sugar and trans-fats, and these can be problematic for acne sufferers, because they are considered “inflammatory”. Usually, “inflammatory” foods are considered bad, because inflammation has been shown to have comedonal effects in the skin, such as thickening and closing of the pores, where the sebum producing glands are located, resulting in “blocked pores”.

Inflammation is not an inherently bad thing, as it is a process through which the body’s immune system responds to ‘harmful stimuli’, but it can become a problem when it is not properly regulated. Diet, and in particularly sugar, has been shown to affect acne, despite many dermatologists claiming otherwise.

Does sugar cause acne?

Sugar can contribute to the formation and maintenance of acne by increasing levels of inflammation. As such, it is best to minimize added sugar intake, with new guideline recommendations limiting it to about 5% of total calorie intake, which means about 20-25 grams for the “average” adult. 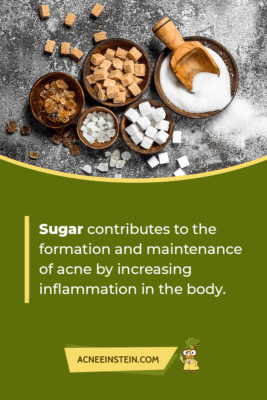 At the end of the trial, participants in all the groups had a higher fasting blood glucose (increased by 4–9%) and higher levels of the inflammatory marker, C-reactive protein (increased by 60–109%). Furthermore, sugar has a high glycemic index (GI), and diets high in GI load have been shown to contribute to acne.

Verdict: Sugar contributes to acne. It is best to limit its consumption.

Are trans fats bad for acne?

Some commercial peanut butters contain trans fats (e.g. Tesco’s). Trans-fats are a type of man-made fats, which are created by adding hydrogen to plant oils to make them more solid. This fundamentally changes the structure of the fat and makes it unlike any of the cis-fats occurring naturally.

Verdict: trans fats contribute to acne and heart disease, and are unhealthy even in small quantities.

Advice: best to avoid it in peanut butter altogether and look for substitutes – e.g. other vegetable oils.

Do peanuts cause acne?

There is no evidence that peanuts cause acne. They are high in the ‘healthy’ type of fats (monounsaturated). They are also a good source of Omega 6 fats, and despite what some health bloggers have claimed, Omega 6 are not actually bad for you.

Let me explain a bit why this myth exists (apart from the sole reason of generating clicks). Some people would suggest avoiding peanuts and peanut butter altogether because they contain a significant amount of these Omega 6 fats. Omega 6 has a bad reputation because it is said to be ‘inflammatory’, and their twins – the omega 3 – are said to be anti-inflammatory.

The scientific truth is a bit more complicated however. Whilst the bottom line is that some omega 6s can have inflammatory properties, that is not true for every fat in the omega 6 family).

Do peanuts contain too much omega-6 fats?

About a third of peanuts’ fat content comes from polyunsaturated fats (PUFAs). [PUFAs are 3 types: omega 3, omega 6 and omega 9.] Peanuts PUFAs come exclusively in the from of the omega 6 fat ‘linoleic fatty acid’ (LA). However, the main proinflammatory omega 6 is actually arachidonic acid (AA) and not LA.

Whilst it is true that some LA is usually transformed to AA through a long chain of enzymic events, the conversion rates are incredibly small – between 0.3% – 0.6% percent of total LA is converted to AA. Thus, given that only a third of peanuts’ fat content is PUFA exclusively in the form of linoleic acid, it would be very unlikely that one is getting enough LA to produce too much AA and cause inflammation. 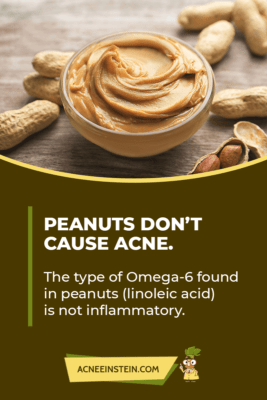 The findings of a meta-analysis that compared several studies further support the notion that consumption of LA does not increase AA and inflammation. In one part of their analysis, the authors looked at 16 dietary intervention studies that explored the effects an increase in dietary linoleic acid has on measures of plasma arachidonic acid (the inflammatory omega-6).

The results from these studies showed that increases in consumption of linoleic acid (12-550% compared to baseline) do not lead to increases in AA. In fact, eating as much as 13% of total calories in the form of linoleic acid did not increase AA significantly, and in some cases (3/16 studies) it actually decreased AA plasma levels.

A quick note: it is still a good idea to avoid highly concentrated omega-6 sources, such as certain vegetable oils (e.g. safflower, canola – you can have a look here for a breakdown of the fat composition of the most popular dietary fats and oils). There is evidence that the omega 3 and omega 6 PUFAs use the same enzymes for their metabolism. As such, overconsumption of one and not enough intake of the other, will inevitably skew the balance – and both omegas are crucial for the initiation and discontinuation of inflammatory processes.

Verdict: There is no evidence that the Omega 6 (linoleic acid) in peanut butter can cause acne.

Advice: don’t worry about it.

What about peanut allergies?

About half of the peanut allergy cases only present with minimal allergic symptoms such as flushing and/or a skin-rash or mild digestive symptoms. Although not life-threatening in such circumstances, the allergic reaction will still activate the immune system and induce inflammation. 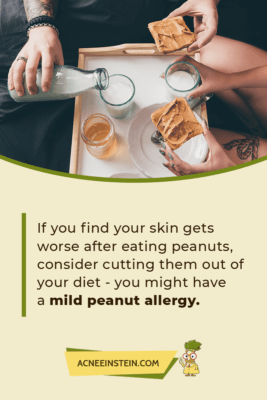 Repeated exposure to allergens leads to chronic inflammation – and this is not only bad for your skin and can aggravate acne, but also bad for your overall health. If you find that eating peanuts aggravates your skin or stomach, and/or causes acne, you should eliminate it from your diet to see if the symptoms improve, as you might actually have a mild peanut allergy.

Regarding acne medication, a peanut allergy is considered counter indicative to an oral acne retinoid medication (isotretinoin, also known as roaccutane), although cases of allergic reactions to the medication are extremely rare.

In fact, some researchers argue that using oral isotretinoin in patients with a known peanut allergy does not require any specific precaution. Nonetheless, it is important to tell the doctor about your allergies before starting any medication.

Can I eat peanut butter if I have acne? TL;DR

Peanut butter is okay to consume (in moderation!) if you have acne, unless you have a peanut allergy. One way to make sure your peanut butter is completely ‘acne-friendly’ is to buy peanut butters with no added trans-fats (hydrogenated oils) and little or no added sugar. The creamy butter texture is achieved by adding vegetable oils, and there are some healthier alternatives, such as palm oil (saturated/PUFA) or peanut oil (monounsaturated/PUFA).

Choosing peanut butters without any added sugar is preferable, but even when there is some added sugar, it makes up a very small part of it. So if you prefer a sweeter peanut butter, a good rule of thumb is to only buy butters with peanut content greater than 90%.

This way the amount of added sugar content will never exceed 10g per 100g of product, which is below the recommended value of 20g a day (per 2000kcal – standard diet; peanuts also contain some naturally occuring sugars, so it will be less than 10g anyway).

Regarding peanuts themselves, there is no real cause for concern for acne sufferers. Despite the fact that about 30% of peanuts are composed of the so-dubbed “proinflammatory” omega 6 fats, there is evidence that even less moderate amounts of omega 6 will not increase inflammation. Furthermore, the type of omega-6 contained in peanut butter is actually not “proinflammatory”.

5 Sneaky Ways Summer Heat is Causing Problems for Your Skin

Should You Always Avoid Skincare Products With Alcohol?

5 Steps To Getting Clear Of Your Acne

5 Skincare Mistakes That Could Be Making Your Sunscreen Less Effective

8 Skin Experts Share Their Most Essential Advice for Summer